To kick off this week’s Beirut blog series, we draw from our co-coordinator Ashish Kothari’s reflections from ACKnowl-EJ network meetings in Lebanon, during which we discussed and visited many sites of environmental conflict and alternatives, including cases featured in the EJAtlas like the Bourj Hammoud garbage mountain, the Bisri Dam project, and postwar privatization at Dalieh de la Raouche. Below, three of our visits are briefly highlighted, honing in on coastal issues and conflict between Israel, Lebanon and Occupied Palestine.

Our first day of ACKnowl-EJ global project teams meeting in Beirut fortunately coincided with ‘Heritage Watch Day’, an event by local activists and artists at the ‘Dalieh of Raouche’, one of the last stretches of the coast here that still has elements of nature left, and remains accessible to the public. Everywhere else the Beirut coastline is privatised. Here too there has been an attempt at privatisation, being resisted by local groups, including many youth. The event included local tours re. the area’s biological and cultural importance, talks about the threats to it, a local produce market, and a music concert. Local activists describe Dalieh as “the last of the coastal headlands, overlooking the emblematic Sakhret el-Raouche, the landmark natural rock formation that dominates Beirut’s view from the sea. It includes a prosperous biodiversity, a rich array of geomorphological features, as well as archeological remains…. “. The event featured food from Souk el Tayeb. To learn more about the case of Dalieh, check out this booklet put together by The Civil Campaign to Protect The Dalieh of Raouche, which offers a very thorough overview of the political, social, cultural and economic forces at play in the attempted privatization of the coast.

Near the end of our trip, we ventured down south to a different part of the coast, where we met Mona Khalil, who has fought for years (along with other groups in Lebanon) to protect the last remaining public access and turtle nesting beach of significance in the country, at El Mansouri village near Sour. Facing insults, shooting in her house’s direction, killing of her cat, and many other kinds of threats, she has endured. The 1.5 km stretch of beach has about 50 nests on average every year, and Mona along with young Rami Khashab (from El Mansouri, now training to be a marine biologist) and other associates patrol it every day during nesting season, to see if any of the nests may be in vulnerable positions. If so, they dig up the eggs and relocate them to safer places on the beach. They also place iron grills on top; post-2006 attack by Israel in the area, apparently a lot of foxes fled from inland towards the coast, and have learnt how to dig up and eat the turtle eggs! (The invasions and occupation by Israel are incidentally a v. common refrain here, with Lebanese and other residents obviously having been scarred by them). Mona also runs a homestay-like arrangement, the Orange House. 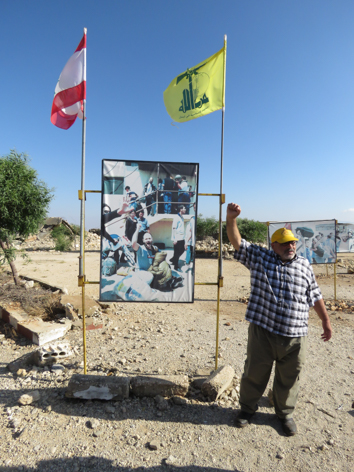 Visiting the Khiam prison, where Israelis detained Lebanese people during their occupation of southern Lebanon in the 1990s, was a sobering experience. Abu Ali, a detainee, gave us what he called a ‘toned down’ version of the tortures that he and fellow detainees were put through, including electrocution, ice/cold water treatment in winter, being dragged on knees across rough roads while being beaten by soldiers, having women relatives stripped and paraded naked in front of others, and much more. I was stunned into silence. About 5000 people, only about 500 of them Lebanese liberation fighters and the rest just civilians or relatives of the fighters picked up and ‘treated’ like this to make an example of what could happen if Israeli occupation was challenged. In 2000 Lebanese civilians and Hezbollah finally got the prison liberated. I’d heard of some of this, but visiting a place where it has happened and meeting one of the persons tortured, is hair-raising, numbing, and enraging all at the same time. Also travelled along the border between Lebanon and occupied Palestine, which some people call Israel, looking down at the fertile valley where Palestinians were evicted to make way for Israelis to settle. Heard several stories of how all this happened, which too were horrifying. Zeina Fakhredin of the Association for the Protection of Nature, Jordan, told us about how the Israelis keep destroying old olive and other native trees, that Palestinians value, and replanting with fast-growing species; as a response her Association has a Million Tree planting campaign that puts back native trees, and enables farmers to claim/reclaim lands that Israelis are trying to take away from them. Rania Masri of Asfari Institute and Karim Eid Sabbath, a researcher, told us about various other aspects of the Israeli occupation.

For more stories like these, keep an eye on the EJAtlas and get ready for the soon-to-be-launched Arab Regional Platform!

Here on the ACKnowl-EJ blog, we’ll continue this week with reflections from our meetings in Beirut. Up next: what’s it like to form part of a global network of scholar-activists working on transformative knowledge production? Members of our two sister Transformative Knowledge Networks, PATHWAYS and T-Learning, reflect on similarities and differences in our approaches after our recent convergence in Beirut.